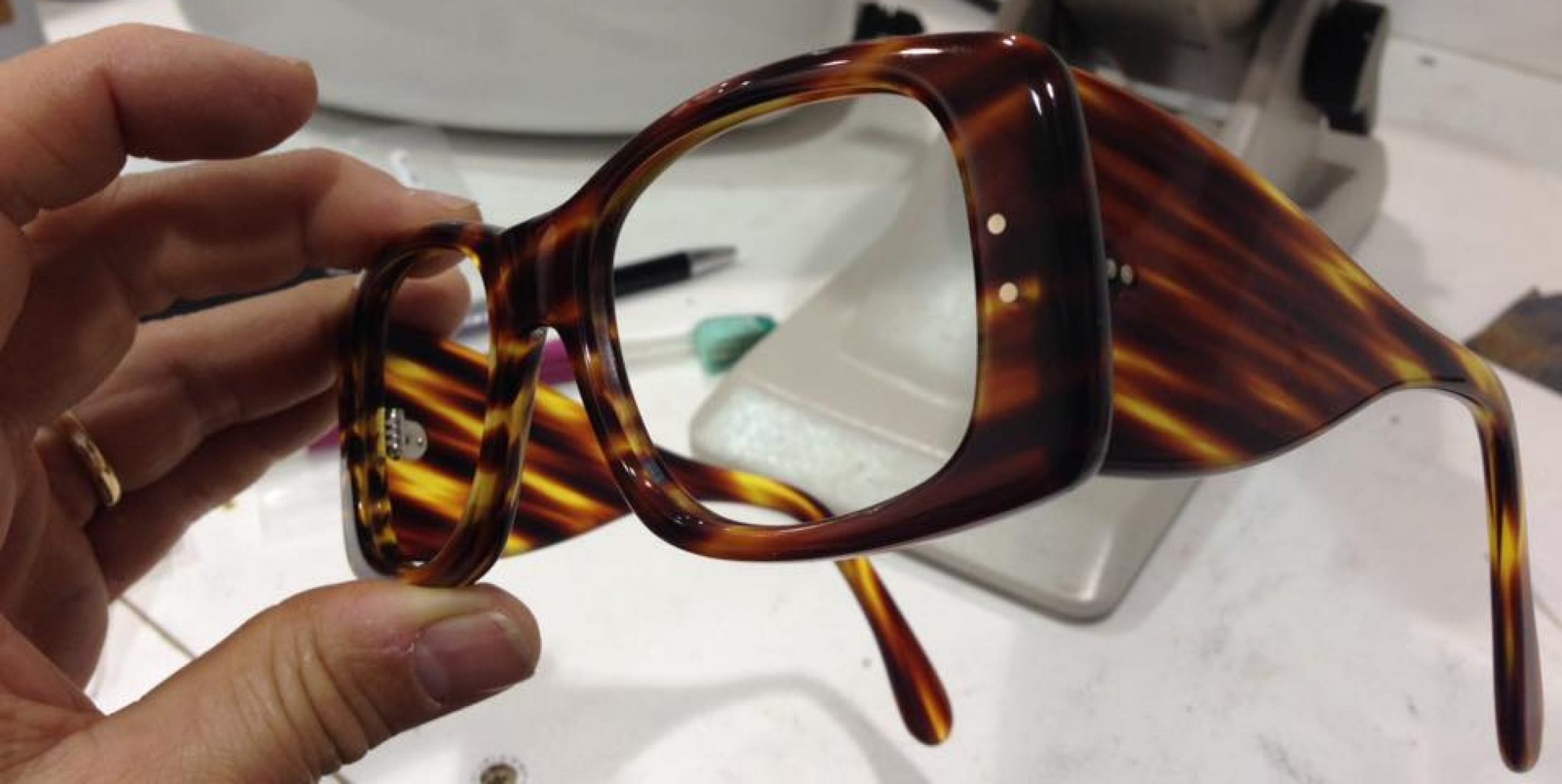 Benjamin Franklin is reputedly the inventor of the first bifocal lenses. He had his optician split his distance and near lenses in half and join them together down the middle. This allowed excellent distance and near vision with one pair of glasses. Of course, times have changed and the manufacture of multifocal lenses has become much more sophisticated. There is still a place however for the original bifocal design. In this case our client is an airline captain and his visual needs are quite demanding. Many pilots do quite well with standard progressive lenses, however my client feels uncomfortable with the slight peripheral blur experienced with them.

Below is a photo of the pair that I made for him. They have his full distance in the top, gauges distance in the middle and the near is for the fine detail of filling out paperwork. All set at the correct heights for easy usage.

There are many instances when patients can be assisted with Franklin split bifocals/trifocals, in particular eye muscle balance issues and problems that arise when the lens power is different in the right and left eye. Really, the use for these lenses is only limited by our imagination.

Sabae is a city on the Japan Sea in around the middle of the main island of Honshuu. It has about 69000 residents, of which around 5000 are directly employed in the business of making optical frames, lenses and associated machinery. We love Japanese frames because they really have a quality which is a cut above the rest. Last year we visited Sabae and had the fortune to meet some really interesting people. Below is a picture of Mr Nishino, who still makes frames by hand and has been doing so for the best part of 50 years. We love and appreciate this traditional craftsmanship which still persists throughout Japan.

Note the heavy timber table that he is sitting crosslegged at. It is very old and originally there would have been four craftsmen sitting there (two on each side). Note also the wire brush stuck under the timber rest so that he can constantly unclog his file. I’m really glad I’ve seen this as it might not last much longer! I’m going to post some more about Sabae and optical frames from Japan so look out for it if you’re interested!

This post is originally from May 25th 2012.
Below is a picture of Lucy. Lucy had her eyes examined with our optometrist Anthony and then chose a very cool new style with a “Nulady” by the classic American manufacturer “Shuron”. We think these look fantastic on Lucy and reflect her bright personality and compliment her natural beauty perfectly. We all really enjoyed the selection process with Lucy. We are surely lucky to have such wonderful clients at Designed Eyes!!

We recently made a frame for Bridget. The lenses have been done and the job is now completed. We are really happy with the result and so is Bridget! Doesn’t she look stunning in her new custom made eyewear! The lenses are progressive transitions with anti-reflective coating.

We recently made some rimless eyewear for George. It was a frame that he had bought elsewhere which had very small lenses. George needed a bigger size than the originals, only problem is that George lives on the south coast of New South Wales and we’re near Melbourne in Victoria. So after seeing some photos of George with the originals on we set about getting the size, fit and dimensions right. The results are evident from the pictures below. I’m sure you’ll agree the fit of the new lenses (the right hand picture) is much more suitable than the originals and George by all accounts is very happy with the result!

Sometimes we do interesting things to help our clients. A gentleman came to us today asking if there was some way we could help his poorly fitting glasses that he had purchased elsewhere. They were sitting way to low on his face due to his rather narrow nose. We retro fitted nose pads into his frame, now they sit perfectly and he can see again! The first step was to remove the original moulded plastic pads with a file, then smooth the area with fine sandpaper, then polish. We then drilled holes in the frame and pressed in the new titanium pad arms.

Robyn is a long time customer of ours who travels all the way from the opposite side of Melbourne which is two hours away just to purchase her glasses from us. This time we made her lenses to our own design which have 16 Sworovski diamantes emplanted into each lens. The rimless mount is a ‘Stepper’ titanium which are very fine and give a very subtle, minimalist look. We used Japanese Hoya progressive (multifocal) lenses which offer fantastic scratch resistance with their advanced coating technology.

We recently went to Japan and picked up some more of these clip on sunglasses called “Caesar Flip 2”. They are beautifully engineered and and are very neat in appearance. They flip up and are completely customizable for almost any shape glasses. The example below is a sample I made for the shop. Lenses are polarized and are available in grey brown and  yellow. We can custom make non polarized lenses to any colour or density if necessary for an extra charge. Not only that, we can make prescription lenses to fit these clip ons as well for those with special near vision needs. Yellow polarized lenses are great for fly or freshwater fishermen who need polarization in dull conditions.

Price is $110 for standard polarized lenses. As it is custom made we need your glasses here to make them.

I had a call from a gentleman the other day who has a very high spectacle correction for astigmatism. In his left eye he requires a power of -3.00/ -12.00 x 45. Now that is VERY high astigmatism. A lens of that power being displaced off axis by only one degree will cause intolerable blurriness to the wearer. So this poor gentleman had had glasses made at an optometry practice near his home in Melbourne, however upon taking delivery of the glasses he realised that he could see much better if he lifted up the left temple so that it sat 25mm above his ear. He went back to the practice that made them, however even after a couple of attempts at having the glasses re-made they were never correct and he always had to do the same thing to see clearly. Eventually he made a prop from a piece of cardboard which he stuck under the tip of the left temple so that the glasses sat at a permanent angle allowing him clear vision. The optometry practice in question (also frustrated no doubt at the laboratory’s inability to manufacture the lens with sufficient accuracy) basically put up their hands and told the gentleman that that is the best that can be done. Now the original prescription called for the lens to be made with an axis of 45 degrees, however it had been made to 40 degrees, which clearly indicated to me that the lens had swung off axis during the edgeing (shaping) process.

After finding us on the internet and some phone discussion, the gentleman travelled the one hour to come and visit us in Rosebud. One of the problems with the job was that the frame was oblong in shape with very square corners, which allows for absolutley no axis alteration once the lens has been cut and mounted in the frame! My suggestion to him was to choose a round or near round frame so that when we mounted the lenses we had some”wriggle room” to swing them around to the appropriate axis. Also, a small frame would cut down on the lens thickness considerably giving a better aesthetic result.

So I started the process by checking the axis at which he was wearing his lenses with the cardboard prop. I found this to be 50 degrees. So I marked up the new (uncut) lenses at 50 degrees and had him hold the lens and check the vision. Sure enough, 50 degrees gave the clearest vision, so I proceeded to make the lenses to his newly chosen round eye frame to an axis of 50 degrees.

Normally this would be easy, but this lens has a -12.00 cylinder, so what I found was that the blocking machine which attaches the block to the lens at the right angle kept skewing it off axis by 10 degress or so. After a number of attempts I managed to get the block on perfectly on axis. I cut the job very gently so as to avoid any axis swing which proved successful and the job ended up absolutely perfect.

Next was to try it on the patient and check his vision. Bingo! Perfect vision with glassses sitting straight on his head. I now have a very happy customer and I feel great having given this man’s vision back without the funny looking tilted glasses. A great result all round!

On Saturday we went to Brendan O’Keefe’s spectacle frame factory in Highett. Brendan is the only wholesale spectacle frame maker in Victoria, crafting them from aluminium and then anodizing them himself. Brendan has been making frames for maybe 20 years or so now. Like me, Brendan started his career at Coles and Garrard in Bourke Street Melbourne as an optical mechanic. Many of of the machines and jigs in his factory were made by Brendan, who has a great mind and skill in engineering.

We’re very fond of Brendan here at Designed Eyes. He encapsulates the image of the individual craftsman, toiling away for hours in his cluttered workshop to produce magnificent pieces of what are masterpieces of artwork and engineering.

His frames are light, comfortable and are absolutely unique. And made in Melbourne!

A few years ago during our trip to Japan we were fortunate enough to be able to visit high quality Japanese frame manufacturer Sankou Kougaku. We were able to experience many parts of the production process. One of the most fascinating for us was to see the artistry of the workers in the prototype department. These men toiled for hours on single parts of frames at very close range, producing perfectly engineered frames from little chunks of metal. They file and sand for hours to achieve the required result. It’s great to see this craftsmanship still alive and well in Japan.

Check out the photos below to see how close they work.